The Blake Society and the Blake Cottage Trust are lying: they have splattered Blake’s Cottage with mud

We started the campaign to acquire William Blake’s Cottage in Felpham with an ideal: to contribute our grain of sand to a better world. We wanted to create a haven for artists, thinkers, creators, so that from the Cottage’s doors beauty, truth and human solidarity would go out into the world.

Instead of that, we ended up with deceit, harming of people, theft of people’s work, contempt for Blake and for everyone who supported the campaign, a cover up and fraud. This, because of an abysmal lack of scruples, some broken souls, personal interests, petty ambitions, cowardice – what are we to expect from people like these in times of war?

There is no evil that cannot be done by a lying person, who has transgressed one precept, and who holds in contempt the world beyond. 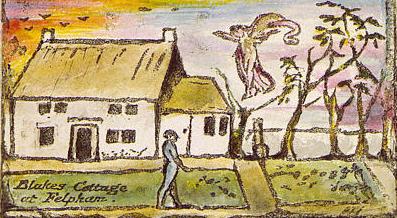 Blake’s Cottage is in a serious state of disrepair, after 9 months of having been acquired by the Blake Cottage Trust, an illegitimate organism of only three men set up secretly. The large consortium of accountable individuals and organisations that we promised the public that we would create was meant to join skills, efforts and fund-raising potential so that this did not happen. That consortium was also to implement the clearly defined project for the Cottage that the Blake Society and the Blake Cottage Trust have now disowned. The Cottage must be managed by responsible people who honour the original project that people gave their money and support for; by people who care, and who are publicly accountable.

A Vision for Blake’s Cottage – ADE

[Document sent to the Blake Society and the Blake Cottage Trust in November 2015. Not a single one of the concerns raised here has been addressed by either Charity so far]

How many Scofields for Blake’s memory?

It’s hard to know where to start in order to explain what has been wrong with Blake’s Cottage appeal and the developments since it was purchased. It makes for some 12 different folders now in the hands of the Charity Commission, and involves a policy of secrecy and division, lying, deceit of the public, bullying, thoroughly dishonest and unethical behaviour, the stealing of people’s work and harm to concrete persons, the elbowing out and exclusion of those who founded and ran the campaign along with the Blake Society’s Chairman, Tim Heath, collusion, the washing their hands off their responsibility and a cover-up from the Blake Society and, ultimately, what I strongly believe amounts to fraud.

William Blake deserves much better than this.

In the printed Blake Society Programme for 2016-2017 recently sent around to the Society’s members a tour around the Cottage is announced for next 11 June, and in a further pretence at openness and transparency, it is also announced that afterwards the new Blake Cottage Trust will host a discussion along with a prominent local organisation in Felpham about the future of the Cottage. They did so without the approval of the mentioned organisation, and knowing fully well that their representatives could not possibly attend the discussion on that day.

As members of the Blake Society will have noticed, they have now had to amend their invitation to that event in their June newsletter.

The Blake Society has also recently included in its newsletter the minutes of their latest AGM, that have little regard to truth (please see my former post below, “The Minute Particulars”).

All this has to change. I believe it can change if the following points are taken seriously:

What is happening around Blake’s Cottage now is a lamentable reenactment of the trials that William Blake went through in Felpham more than two hundred years ago.

An example of this is what has happened to the only source of public information we have about the Cottage since it was purchased in September 2015.

Up to at least 5 June, less than a week ago, if you looked up in Google “BlakeCottage.org” or clicked on  http://www.blakesociety.org/blakecottage/, what you came across was an update from September 2015 announcing the purchase of the Cottage. Below that you could see the webpage we had created for the Cottage appeal, with its history and an outline of the project to which people gave their money. In fact much of that page had been done by myself, including the update for November 2015, the last moment of hope I had, within days of encountering again the bullying and the secrecy that made me leave the Blake Society and the campaign.

It was sad to look at that page, just as abandoned as the Cottage itself seems to be now.

But it was an important source of information, for it outlined the original project and it included the Just Giving button through which many people made donations to the appeal, still in use up to a few days ago. It clearly asked people to give money to the Blake Society.

Since I started making public this sad affair a few weeks ago I have been asking for the Blake Society and the Blake Cottage Trust to honour the truth: that this was a Blake Society project and that there was a clearly defined vision behind it. Instead of doing that, I realised yesterday, 9 June, on looking up that page again, that it has changed in the past couple of days. Now it talks only about the “success” of the campaign and links to an article about it in The Guardian – the press, that was as misled as all the rest of us.

The Just Giving button – eloquent evidence that the Blake Society was asking for money for a Blake Society project, and that people sent money to it for the appeal – has disappeared too. But truth cannot be deleted so easily. I share with you a 5 June 2016 screenshot of the Cottage appeal’s Just Giving page that could be accessed through the now disfigured Cottage page:

Not much, apart from the fact that I will certainly not attend that mockery of an opening of the Cottage’s doors tomorrow.

On September last year, when I found out that while the Cottage was purchased the Blake Cottage Trust had elbowed out the Big Blake Project, and that the Blake Society Committee had been left completely in the dark about what the Chair had been doing with the appeal, I urged both Charities to get together with the Big Blake Project, sort out whatever differences there might be and organise for Blake’s birthday in November a celebration hosted by all of them, showing a united, inclusive, harmonic front to a united, inclusive and harmonic project for which we worked so hard. I expected too to be part of such a celebration, given my pivotal role in the campaign.

That is what the Blake Society members, donors for the campaign and the public deserved. That is what William Blake deserved: a happy, open, dignified celebration, rather than a surreptitious event organised around deceit and secrecy.

Please read my former posts in this blog so that you get a clearer idea of what is happening here: ‘How many Scofields for Blake’s Memory?’ and ‘The minute particulars’.

I ask the Blake Society and the Blake Cottage Trust, again, for transparency and for accountability. I ask for them to honour the original project for Blake’s Cottage, the frame for a large consortium that we promised we’d create, and the Blake Society’s responsibility for the project. I ask for them to stop acting through dishonesty and fear and honour truth instead, and for the most elementary human decency.

Should anyone reading this – donors, Blake Society members, authorities, press – want to read the minutes written throughout the campaign, bear in mind that the new Secretary, Antony Vinall, has been taking the BS minutes for several years, has manipulated them in agreement with the Chair before and refused to record crucial information. He distorted truth as well in the minutes of the January 2016 Blake Society’s AGM and has no scruples about lying. If you want to double-check, I have evidence of this and the original emails through which original minutes were sent to the Committee. I also hold screenshots about evidence that these organisms are now trying to remove from their webpage. I hold in fact 12 folders of evidence about the saddest episode yet of betrayal to Blake after his death.

My work as a translator stems from a genuine love for language. I dedicate to each project the time and respect it demands, making sure that I provide the client with a faithful and high quality rendering of the original. If you want accuracy, a painstaking attention to detail and the flawless results that only devotion to the written word can give, you have found your translator. View all posts by diazenciso

One thought on “The Blake Society and the Blake Cottage Trust are lying: they have splattered Blake’s Cottage with mud”